The People of Rome

There was once a traveler who was on his way to Rome, it was a long and dusty path and he had misgivings about the city. He had heard so much, travelled so far and he was nervous about how he would make his way in the new city. A days walk from Rome he reached the top of a hill from which Rome in its glory could be seen. And sitting in the shade of a rock sat an old man. He walked over to the man.
“Wise one” he said, “ I have traveled far, please tell me, what are the people in Rome like?”
The old man looked at him for a moment and said, “Where are you from brother?”
“I am from a village outside Athens sir” replied the traveler.
“And how are the people there?”

And the traveler replied “The people from my village are generous, kind and understanding, they welcome travelers and treat all men as equal”
“Well” said the old man, “You are in luck, for the people of Rome are just the same”

The following day another traveler reached the top of the mountain, looked toward Rome, noticed the old man and walked over to him and said: “Wise one, I have traveled far, please tell me, what are the people in Rome like?”
The old man looked at him for a moment and said, “Where are you from brother?”
“I am from a village outside Athens sir” replied the traveler.
“And how are the people there?”
And the traveler replied, “The people from my village are mean, unscrupulous and lack any compassion, they are suspicious of travelers and only look after their own interests.”
“Well” said the old man, “I regret to tell you that the people of Rome are just the same.” 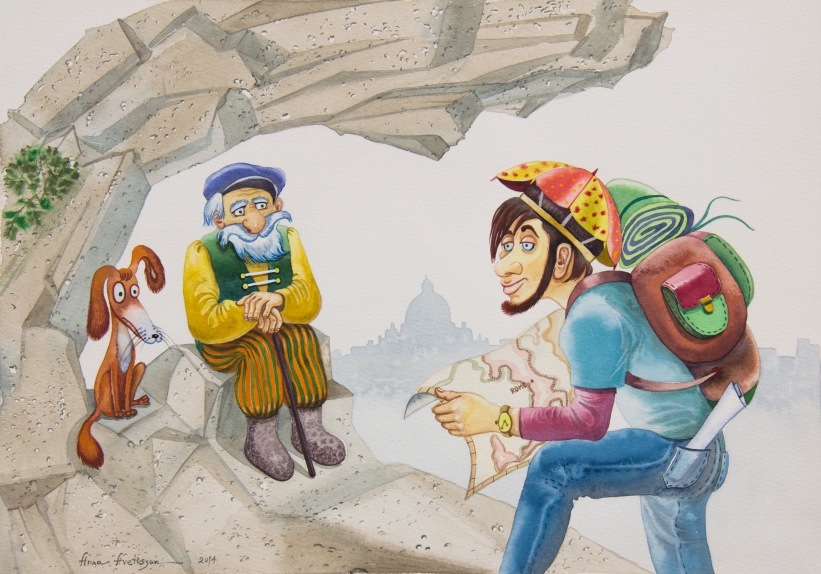 We often feel that a situation is bad and many times we relate this with particular events and circumstances that seem to us unique to that situation. However so many times we fail to ask ourselves if we have encountered the underlying issues before and whether it may in fact be us who is the common element. We are inclined to take our baggage with us.
I believe that wisdom is paying more attention to what is going on around us than the next person and seeing our part in this; and this includes us recognizing our part in repeating patterns. We are almost never a neutral party in anything we are a part of.
Thus for International Development we must try to see how we take our own projections into various situations, staff groups and communities. And be aware of our own inclinations to make judgments and prophesies based on our own assumptions and then to see how these tend to become self-fulfilling. Just as the travelers in the story above we tend to see our situation as being the result of others behaviors rather than the result of our own interactions with others. We expect others to be open to change and have positive mindsets when so often we fail to be genuinely open and positive ourselves. We expect others to have self-belief when we do not believe in our own power to be real catalysts for change. And we expect others to take risks and be advocate for change, when we do not take risks or challenge the authorities in our own circumstances.

Jock Noble is the Lead of World Visions Economic Development Learning Hub for the Middle East and Eastern Europe. After a career of trying to teach turtles to fly he finally got into the water and is learning to swim with them.

I have worked in thirty countries with most time spent in India, Kenya, Indonesia, USA , Australia and Armenia. My current role with World Vision International is as a Livelihoods Advisory based in Manila. Before this I spent 4 years based in Armenia leading an economic development learning hub for 10 countries across the Middle East and Eastern Europe. I spent 8 years with World Vision Australia where I founded and lead the Social Entrepreneurship and Economic Development Unit (SEED), a team of economic development specialists,to establish and support innovative initiatives in poor communities from Africa to the Asia Pacific, Senegal to Timor Leste.. I believe the reason people are poor is that they do not have enough money and our challenge is to help instill hope and a genuine sense of self-belief, starting with those of us who somehow work in development. I was the founder and CEO of Diversity@work Australia Inc, a social enterprise developing innovative models, strategies and educational programs to strengthen companies through diversity and inclusion. I hold a Master of Entrepreneurship and Innovation and a Masters of Strategic Foresight from Swinburne University in Melbourne, post-graduate studies in Not for Profit Management at Georgetown University and Negotiation and Conflict Management at Latrobe University Melbourne. I was the Carey Medal winner for 2007 for exceptional and outstanding service to the community. So it goes Published Books: 'Postcards - What am I doing here' (2016) which is a collection of my blogs along with selected photographs, and Stores from the Road - Ten stories for workers in international development (2016)
View all posts by jocknoble →
This entry was posted in Stories From the Road and tagged Advice in International developement, international development, Projections in international development, stories about International Development and Relief, worldviews in international development. Bookmark the permalink.