Armenians being Marched by Turkish soldiers near Van 1915

I stumbled on the rocky ground but managed to grab hold of the piping rail and pull myself up the grid iron steps to the rear landing of the carriage, just as the train picked up speed.  And it was only then that I saw Jane running towards the train along the track from the station. Alongside I helped her up and she said the men at the station had told her to wait until the train came back again from the siding. They took her to the Station Masters office and some of the men had tried to rape her. She wrestled herself free, jumped off the platform and ran.

That was over 30 years ago. Then the Shah was still in Iran, it was before the siege of the American embassy, before Gorbachev and Regan, the fall of the Berlin Wall, before the collapse of the Soviet Union, Bosnia, Rwanda and the genocides, before Bin Laden, Al Qaeda, 9/11 and falling men. Before the wars in Afghanistan and Iraq. Before mobile phones and laptops and IPods and 24 hour news. But we had seen lots of stretchered bodies in black and white on the nightly TV news in Vietnam and otherworldly kids with big eyed scull heads, pathetic skinny arms and dazed squatting women in cloth in Ethiopia in 73. And the camera usually showed some soldier with a bandage over his eye to be sent home or a starving woman in a tent with a bowl and made some comment like, “and these are the lucky ones”. I have noticed that reporters in tragic places still say this. It must be taught in journalism school. Or maybe we have a luck rescue gene in our unconscious that emerges to give us hope or let us off the hook.

Jane and I were backpacking from Australia across Asia to London. We had been gone over a year now. We went overland and through Afghanistan before the Russians had taken over militarily but there were signs of Russian influence everywhere. And in the summer of 79 in the Afghan countryside there were messy lines of men signing up for the army. Most young and some old with henna stained beards, turbaned and in baggy olive green, sand beige, kurta pyjamas, squatting in the precious shade of skinny poplar tree rows. We stayed a few days in Bamiyan north west of Kabul by the old silk road, within the high walls of a place that for centuries camel trains stopped for rest and supplies. We had stood atop the 50 metre high Buddha and taken in the valley below. Settlements of mud walled compounds joined together like a pencil maze and some like medieval forts. Small farms a few green trees stark against the beige and grey landscape. That was before the Taliban had blown these statues to rubble.

We took a bus to Herat and on to Tehran where we boarded the Lake Van Express, which in those days went all the way to Istanbul. The trip was 4 days and in Turkey at Van on the eastern shore of Lake Van the carriages were shunted in to the bowels of a ship. The crossing took four hours then the carriages were hitched to locomotive on the western side for the remaining 2 days to Istanbul. It was just before the locomotive re-coupled that Jane needed to go to the toilet and so she was still on the ship when the carriages were connected and hauled a mile up the line. And me not thinking that the train was actually going back jumped off rather than leave Jane and I only barely managed to clamber back on when it finally reached the switch point and reversed back to Tatvan station.

But then I knew nothing of Van and its dreadful history or that the fathers of the men who had tried to rape Jane would likely have lived there when the killing of tens of thousands of Armenians living on the wrong side of a line drawn by colonial interests. And in 1915 Orders out of the fearful minds of Jevdet Bey the Governor of Van and Enver Pasha the Minister for the Ottoman Army, lead to the Armenians who had lived here for 1000 years being butchered and driven on death marches while the soldiers took their valuables and neighbours stole their houses. And those who somehow survived became refugees in Syria, Lebanon, and to every corner of the world. All together around 600,000 Armenians were slaughtered outright and a further 400,000 women, children, elderly and infirm died on the death marches to the Syrian Desert. Over 150,000 Armenian children became orphans. In the USA, France and England there were some who wrote about what was happening but nothing was done. And the Turks have never admitted their part so to this day there is little healing on either side. Hardly a family in Armenia didn’t suffer loss.

I went to the Genocide Memorial in Yerevan and the most moving thing for me was walking through the fir trees planted before the museum itself. The haunting music of the duduk, a reed flute carved from an apricot branch is piped through these trees and it reaches into you like the plea of a child, audible tears of the heart.   Yesterday during some prayers at a work retreat and thinking about our world, we sang the following song as a wake.

“If the war goes on
and the children die of hunger,
and the old men weep
for the young men are no more,
and the women learn
how to dance without a partner
who will keep the score?

If the war goes on
and the truth is taken hostage;
and new terrors lead
to the need to euphemise,
when the calls for peace
are declared unpatriotic,
who’ll expose the lies?

If the war goes on
and the daily bread is terror,
and the voiceless poor
take the road as refugees;
when a nation’s pride
destines millions to be homeless,
who will heed their pleas?

If the war goes on
and the rich increase their fortunes
and the arms sales soar
as new weapons are displayed,
when a fertile field
turns to-no-man’s-land tomorrow,
who’ll approve such trade?

Much of the Armenian countryside is rugged and parched dry in summer, steep stony mountains and wretched twisted trees and brittle bushes hanging on for life. Some friends and I drove to the Geghard Monastery built in the 4th Century and once housing the spear that lanced Jesus on the cross. The road wound its way through little villages, green oasis, filled with fruit trees and every kind of vegetable which are for sale on the roadside stalls. Elderly woman sit beside trestle tables stacked with jars of all sizes filled with pickled fruits and vegetables all colours and shapes. And my friends fiancé says that I should never buy pickled goods from the road side stalls, as there are frequent outbreaks of salmonella poisoning and as she said, “whole families has been massacred by the pickled vegetables and all ended up dead”.

One Saturday afternoon I sat with my friend Suren’s extended  Armenian family around a table of local food all prepared on the table we ate at or from the wood barbecue in the garden amongst the fruit trees. I avoided several dishes lest I too be massacred by a pickled vegetable. My friend’s father, he no English and me with no Russian or Armenian, toasted each other and the family with the 62% Cognac he had made from the apricots of the trees in the garden under the balcony on which we now sat. He instructed that with each toast and there were many, I take the shot glass full, swallow it in one and hold my breath. The warmth of the alcohol and the essence of the apricot were like shots of apricot sunshine. And then he told me he would sing. He said there are only seven songs in Armenia and they are all about honey and bears. Then starting low and in the tones of a lullaby he began to sing. I recorded it and later asked a friend to translate and the words are:

A kind, faithful and virtuous friend

If you have a faithful friend by your side

You will pass through darkness like in the daylight

When attacked by enemies, a brave friend is like a sword of protection

If you have a close friend you will never feel old.

I feel it such a privilege to be here, doing something I believe in with people who believe in me. And I think this is really at the heart of human development; believing it is possible that something can be done to make our lives better and believing in each other to make that difference come alive. I am thinking that my work in local economic development is as much about finding new ways to be friends as anything else. 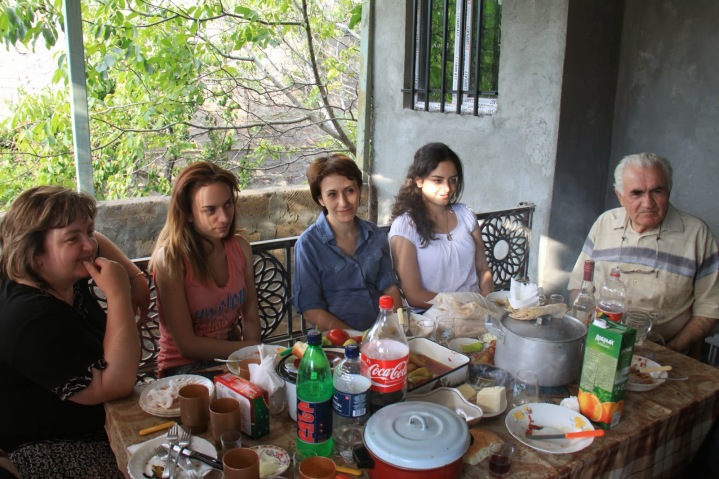 I have worked in thirty countries with most time spent in India, Kenya, Indonesia, USA , Australia and Armenia. My current role with World Vision International is as a Livelihoods Advisory based in Manila. Before this I spent 4 years based in Armenia leading an economic development learning hub for 10 countries across the Middle East and Eastern Europe. I spent 8 years with World Vision Australia where I founded and lead the Social Entrepreneurship and Economic Development Unit (SEED), a team of economic development specialists,to establish and support innovative initiatives in poor communities from Africa to the Asia Pacific, Senegal to Timor Leste.. I believe the reason people are poor is that they do not have enough money and our challenge is to help instill hope and a genuine sense of self-belief, starting with those of us who somehow work in development. I was the founder and CEO of Diversity@work Australia Inc, a social enterprise developing innovative models, strategies and educational programs to strengthen companies through diversity and inclusion. I hold a Master of Entrepreneurship and Innovation and a Masters of Strategic Foresight from Swinburne University in Melbourne, post-graduate studies in Not for Profit Management at Georgetown University and Negotiation and Conflict Management at Latrobe University Melbourne. I was the Carey Medal winner for 2007 for exceptional and outstanding service to the community. So it goes Published Books: 'Postcards - What am I doing here' (2016) which is a collection of my blogs along with selected photographs, and Stores from the Road - Ten stories for workers in international development (2016)
View all posts by jocknoble →
This entry was posted in Postcards and tagged Expat Life, Faith and Hope in International Development, Working Overseas, worldviews in international development. Bookmark the permalink.