Of Swans and Wolves 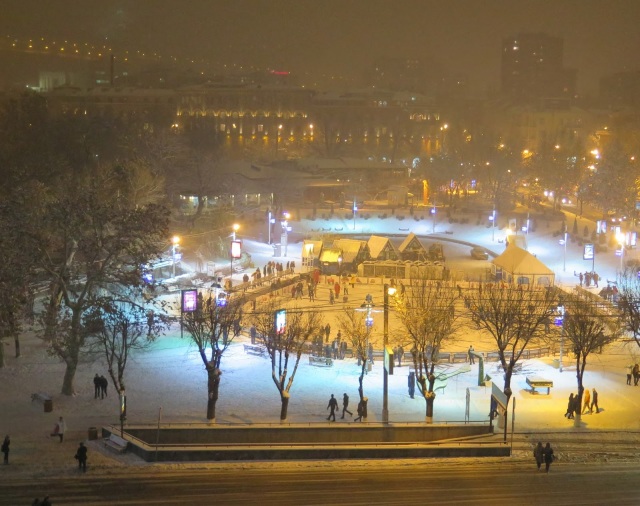 My fourth floor balcony in the center of Yerevan overlooks a small man-made lake. It is called Swan Lake and it is in the shape of Armenia. Up until recently the weather was mild and the lake had water in it. Sometimes the two swans swimming on it were white and at other times the two swans were black. I guess someone switched them every few days. Black swans are hot weather birds from Australia. Recently it began to get cold and I am imagining as it begins to snow, one black swan turns to the other; “what the frick was that?”

Now the lake has become an ice skating rink. The swans have gone and I watch the skaters doing ballet moves to Celine Dion’s Titanic song, loud through big speakers in the crisp air, ‘near far wherever we are, I believe that the heart does go o-on…”.

Today it is -5C, it started out this morning at -13C so it is warming up. My little electronic weather station also tells me that the humidity is -55%. What do you suppose that means?

Having a cup of tea on my balcony I noticed four council workers each carrying a life-size white plastic swan and apparently a map trying to figure out where to put them. I came out later to clear the used tea bag from the patio table and found it had frozen solid to the glass table top. That is a new experience for me.  I see the neighbor below puts bread on the table in the balcony below presumably to keep it frozen.

I have found this winter weather is fine if you dress for it. A few weeks ago I went to the outdoor market and in preparation for these days and bought a Russian fur hat. One of those hats you see people wearing in Moscow on -30 degree news reports. The Armenian man at the hat stand spoke no English and so we did miming interpretations of the various animals, he had hats made from rabbit, mink and other animals I couldn’t figure out from the miming.  I wanted something a bit exotic and ended up in buying one made from Wolf fur. Thinking I might be  part of some wolf extinction story,  with passer by translating, I asked him if the wolf was a problem in Russia or if it was somehow sustainably farmed for its skin He looked at me like I was completely mad and even with translation I was not able to get any kind of coherent picture except for, a wolf is a wolf you stupid man.

When I got home I checked on the internet and sure enough wolves are a problem in Russia. Recently 400 wolves got together in a super pack and surrounded a village and villagers had to mount snowmobile patrols while they waited for the army to arrive.  Apparently there is a high bounty paid for dead wolves and in Siberia the state has extended the hunting season on wolves to be all year round and on January 15 is officially beginning a “three month battle against wolves”. Anyway I bought the hat; it looks ridiculous but better than my ears shriveling up like dried Armenian apricots with frost bite.

Speaking of fur I noticed many bars in Yerevan have signs that read ‘fur bar’. I never went into any of them as I thought it might be the local term for pussy bar and that is not my thing. But now I know that the Armenian script for Bar looks like fur.

I still only know four things to say in Armenian; Barev dzez  – hello, barev luys – good morning,  lav em -how are you? And my newly mastered shnorhakalutyan – thank you.

I have worked in thirty countries with most time spent in India, Kenya, Indonesia, USA , Australia and Armenia. My current role with World Vision International is as a Livelihoods Advisory based in Manila. Before this I spent 4 years based in Armenia leading an economic development learning hub for 10 countries across the Middle East and Eastern Europe. I spent 8 years with World Vision Australia where I founded and lead the Social Entrepreneurship and Economic Development Unit (SEED), a team of economic development specialists,to establish and support innovative initiatives in poor communities from Africa to the Asia Pacific, Senegal to Timor Leste.. I believe the reason people are poor is that they do not have enough money and our challenge is to help instill hope and a genuine sense of self-belief, starting with those of us who somehow work in development. I was the founder and CEO of Diversity@work Australia Inc, a social enterprise developing innovative models, strategies and educational programs to strengthen companies through diversity and inclusion. I hold a Master of Entrepreneurship and Innovation and a Masters of Strategic Foresight from Swinburne University in Melbourne, post-graduate studies in Not for Profit Management at Georgetown University and Negotiation and Conflict Management at Latrobe University Melbourne. I was the Carey Medal winner for 2007 for exceptional and outstanding service to the community. So it goes Published Books: 'Postcards - What am I doing here' (2016) which is a collection of my blogs along with selected photographs, and Stores from the Road - Ten stories for workers in international development (2016)
View all posts by jocknoble →
This entry was posted in Postcards and tagged Armenia, Yerevan. Bookmark the permalink.