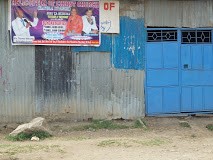 About six months ago, Mr. Kibani  found himself in a taxi going to a dowry wedding with Mr. Morongo who at around 62 was getting married for the third time and then going to jail. The men were both Kikuyu, they taught in the same primary school until each retired and they had remained neighbors and friends. Mr. Morongo had helped start the Kasuku primary school almost thirty years ago and stayed on teaching until three years ago. Kasuku village is surrounded by the rolling, mostly green hills of Kikuyu heartland. In Swahili Kasuku means parrot. Mr. Morongo taught Mr. Kibani’s seven daughters and two of his three sons and now, except for the youngest son who was still at college, they were all grown up and married. Mr. Kibani was happy with his children, they showed respect and contributed to family projects like buying him a new suit and his wife a new bed and even funding church projects that he lead. They both went to the Helicopter of Christ Church on the Gilgil road in Kasuku.

If you left out the churches Prophet and the congregation, the  Helicopter of Christ was actually just a corrugated iron shed, some of its corrugated iron walls had been painted sky blue and it sat on a large dusty plot surrounded by prickle bushes. Above the entrance door, painted straight on the iron there is a red cross and to one side a vinyl banner with  Helicopter of Christ in large red flaming letters and then the opening hours and a cell phone number for private appointments and underneath a picture of Prophet Gilbert Gatonga in a white suite and the Prophets wife and another lady. Inside the church were rows of wooden bench pews, the windows had no glass but welded reinforcing mesh for security which had timber plank shutters which were only opened on Sundays. During the week it was dark and lonely inside. Beads of bright light made shafts through stray nail holes in the tin sheet walls in in the roof. And there was bright daylight surrounding the door and window frames like the second coming was in full fling outside. On the alter were plastic doilies and plastic flowers in Chinese vases all looking so sad. But on Sundays they were resurrected, a true celebration of life and nature and all that is good.

On Sundays the church was alive, and the service might go on for four full hours if  Prophet Gilbert Gatonga was particularly filled with the Spirit. On Sundays the church was filled with heart and voice and people sang so loud and danced and were seized by the Holy Spirit and fainted into eager arms and it all got mixed up with polyester best shirts and suits and body sweat and cheap perfume and new do’s of braided hair extensions and colors so if you didn’t know a women so well you wouldn’t recognize her straight off. It was here that Mr. Morongo had married his second wife.

As Mr Kibani tells the story, “Mr. Morongo was married with five kids but there were issues. It was said that the wife was a devil worshiper. It was said that she was sending people to the husband with letters written in blood telling him funny things. And there was a time when he was walking back from the small shabby town nearby and he passed some people who were sitting on the side of the road, they asked him “Did you receive our letter?” But  before Mr. Morongo could even think it, the guys were gone. Well that’s the story and there were some other things happening as well. So Mr. Morongo and his wife parted ways and got divorced, well actually she fled. That was in 1996 and really this was the only solution.”

Mr Kibani straightened the brim of his hat and continued “Soon after, Mr. Morongo married again and they had another 6 children but this wife was sick and in the last 3 years before her death she was always in and out of hospital and people were wondering why is she always sick. And they were saying it was maybe HIV but no one had the proof and people were wondering how come she was sick but the husband never showed any signs of sickness. So she passed on last year around May leaving Mr. Morongo with their sixth child who was just 3 months old.

So my wife you know and my daughters, we were all feeling for him, him being their teacher and with all the things that had been happening to him with all the small kids. He was a man of the people, people liked him, even though when it came to teaching, everyone said he wasn’t that good. But he was very knowledgeable and had all kinds of different stories that were really of interest to the students, but when it came to teaching itself he was not that good but still everyone liked him so much. As soon as the wife died he remarried again for the third time to a woman who already had two kids. So they married but it was not formalized and so that was why I had to go to the dowry wedding. He probably has HIV” whispered Mr. Kibani, “because people were saying that before the second wife even got sick that Mr Morongo had HIV. And later on the baby that he had been left with also died. But the other kids are fine.”

Mr Kibani’s rubbed his forehead hard and continued “Just before the second wife passed on he had retired, and taken his pension. He tried to become a local councilor but he lost at the election, which was a big blow to him as he had spent about half of all of his pension money on the attempt.  If he had he been elected then his future would be secure as there was always money for roads and community projects and lots of ways to keep some of the money for the councilors involved. His election attempt had been an investment in his future. It is just what the politicians are doing all over Kenya, they invest their money in the elections and if elected they can pay themselves back tenfold. So he lost. Most people who take a pension invest the money in improving their home or their land but he didn’t do any of that. So it hit him very hard with the loss and the loss of the money. At some point he became involved in a nearby flower farm. There was a time when a local guy was stealing stuff from that farm and bringing it to him and he would sell the things in the town. And he was caught. It was not that he was so dishonest but the thing with losing all that money he got a bit funny. And he wasn’t feeling himself and the condition of the wife and of the money. So he went to remand and then to prison for around 4 months. So the new wife now has seven children to care for. But a few are old enough to take care of themselves. Mr. Morongo is 62 or 63 and his hair had gone grey from the stress and he is bound to die young as he has left so much trouble behind. The third wife has started a simple  little day school but no one seems to know how it is going or how she will survive. So that is the story of Mr. Morongo, poor fellow.”

I have worked in thirty countries with most time spent in India, Kenya, Indonesia, USA , Australia and Armenia. My current role with World Vision International is as a Livelihoods Advisory based in Manila. Before this I spent 4 years based in Armenia leading an economic development learning hub for 10 countries across the Middle East and Eastern Europe. I spent 8 years with World Vision Australia where I founded and lead the Social Entrepreneurship and Economic Development Unit (SEED), a team of economic development specialists,to establish and support innovative initiatives in poor communities from Africa to the Asia Pacific, Senegal to Timor Leste.. I believe the reason people are poor is that they do not have enough money and our challenge is to help instill hope and a genuine sense of self-belief, starting with those of us who somehow work in development. I was the founder and CEO of Diversity@work Australia Inc, a social enterprise developing innovative models, strategies and educational programs to strengthen companies through diversity and inclusion. I hold a Master of Entrepreneurship and Innovation and a Masters of Strategic Foresight from Swinburne University in Melbourne, post-graduate studies in Not for Profit Management at Georgetown University and Negotiation and Conflict Management at Latrobe University Melbourne. I was the Carey Medal winner for 2007 for exceptional and outstanding service to the community. So it goes Published Books: 'Postcards - What am I doing here' (2016) which is a collection of my blogs along with selected photographs, and Stores from the Road - Ten stories for workers in international development (2016)
View all posts by jocknoble →
This entry was posted in Postcards and tagged Kenya, stories about International Development and Relief. Bookmark the permalink.