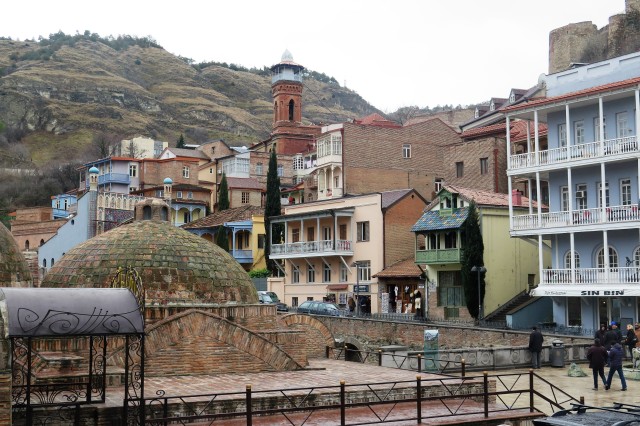 Mid February in Tbilisi and it was cold. Liezel had come with me on a work trip and we had driven up the five hours from Yerevan on Saturday morning to spend the weekend together before my days in the office. We were staying at the ZP Hotel on the left bank, on eof the staff said that it was owned by the mother of a Georgian basketballer who had made it big in the States and was sending money back. Our balcony window faced Mtatsminda, the Holy Mountain and  I watched as a grey cloud of mist got lower until, the ferris wheel and TV tower became invisible and then the mountain itself disappeared.  I watched the swirling snow flurries and the wind moving the tops of the grey green Cyprus pines now looking haunted and unfriendly. It was snug to be in the room, to look down on the wet cobblestones of the street below and people in long coats and strained umbrellas bent forward against the wet and wind.

The first morning after breakfast we went to the Russian Orthodox Church, just down from our hotel, white with green and blue domes and spires. We entered just as something had finished and entering we were pushed this way and that by the stream of people leaving. Mostly elderly hard faced people, men in dark baggy suits and stocky women in black with shawls over their heads. Seated women in near the doorway rustling through pieces of paper with handwritten notes on them. More elderly women sitting to one side black with black scarves soliciting coins for a row of tall tins with coin slits with different handwritten labels on each. The main worship area was cloudy with frankincense and the smoke from beeswax candles lit in trays of hope. Beside a massive stone pillars the tallest priest I have ever seen, white hair, deep red cassock, leaning into the earnest whispers of a women in her thirties and nodding. There were rows of gold framed pictures chest height and people jostled to kiss each one and mothers holding babies touched their babies heads against the pictures and icons. There was one under glass with a black Madonna and baby, and the figures were outlined in gold.

We took a taxi to the old city and walked from the domes of the Abanotubani old Turkish bathhouses, smell of sulphur, and some gaudy signs to tempt bathers. We went into one and a group of men stood around in the entrance way in black leather jackets smoking cigarettes. A blond Russian looking woman showed us a small private room with a steaming spar tub with broken dirty tiles. I said we would be back another day.

We walked up the hill through a maze of lanes toward the botanical gardens. There is renovation happening to most of these traditional houses perched on the side of the hill in the shadow of the Narikala castle which overlooks the Mtkvari River and much of Tbilisi. Coming down the other side of the hill we went past one church with strong iron doors locked and guarded by an noisy black mastiff with pointy ears that looked like it belonged in hell. And then passed that into the thirteenth century Armenian  Cathedral of St George on Orbiri St the sign outside said that it was restored by donations of Armenians. The dome was lavishly painted in pastels in a way I haven’t seen in Armenian churches in Armenia. I wanted to sit on a chair near the alter and think or pray, but the black hatted priest shooed me away to seats at the back and the women who was dusting the alter gave me a sympathetic look.

We ate lunch of hot meat dishes, fresh wood oven bread and long beers at Machakhela and watched the snow flurries in the square in front of Metikhi Bridge. A young woman in a down coat paced up and down to keep warm talking on her mobile and handing out tourist brochures.

We walked up Kote Afkhazi to Freedom Square followed by two olive skinned Roma boys perhaps ten and twelve years old in dirty jeans and ragged coats. It was a school day but no school for these kids. I was watching them and letting them know that I was. I learned in Nairobi to make sure you always know who is around you. Liezel told me not to let them know I was watching them stalk us as it would provoke them, I looked anyway. She was right, young as they were I felt like prey.

We went into a shop selling icons to avoid an attempted bag snatch, you could feel them sizing up all the opportunities around them on the street and we were one of them. A little bit further up the hill was a blond teenage busker fierce on guitar and  singing hard into the cold. The older Roma youth had moved into a doorway one side of him and the younger, mischievous and alert just a few metres up the hill on the buskers other side. I said to Liezel that the Roma kids were going to snatch the buskers coins. We passed and looked back just in time to see the younger one gab a handful of coins a sprint 20 meters up the hill. The busker sang on. There was nothing he could do, to leave in chase would have left his bag and the rest of the coins free for the other youth. It was so easy, so predictable, his hunters knew the odds.

The few days in the office went well, me trying to doing development of our staff in the way I hope they do in the communities we work in. Which means that you don’t know your usefulness at the time and hope to see things happen that you recognize might have had something to do with your passing, but can’t be sure. And if done well no one remembers that it was your words and  thoughts that set off seeds in them and they did it on their own. And it worked or they learned more because they did it on their own.

And so driving back on the road to Yerevan, though the border and the waits from the border police who have Russian supervisors. The wondering if there is something in my passport or Liezel’s that might mean we end up in an office with bored men smoking cigarettes who don’t speak English trying to find some reason why they should make things easy or hard. But it was fine.

And we take a good sealed road back through Noyemberyan. It used to be called Barana but was renamed by the Soviets in the 1930’s after the November Revolution in Russia, It is just a few kilometers from the border with Azerbaijan. Climbing higher and then we are above the snowline. It had snowed the night before and was pristine. The beauty was breathtaking. A landscape of softness snug under heavy soft grey clouds. Trees decorated in ice baubles, fields of fresh pure white snow and the mountains beautiful retainers. And who would every know that beneath were rocky fields and hard won lives of tough skinned villagers who barely survived even when the sun was shining. 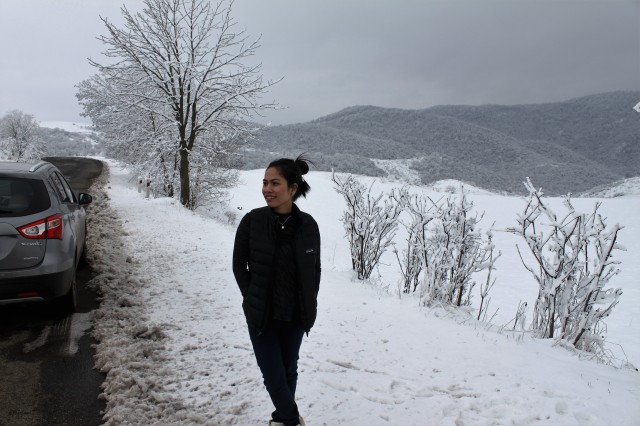 I have worked in thirty countries with most time spent in India, Kenya, Indonesia, USA , Australia and Armenia. My current role with World Vision International is as a Livelihoods Advisory based in Manila. Before this I spent 4 years based in Armenia leading an economic development learning hub for 10 countries across the Middle East and Eastern Europe. I spent 8 years with World Vision Australia where I founded and lead the Social Entrepreneurship and Economic Development Unit (SEED), a team of economic development specialists,to establish and support innovative initiatives in poor communities from Africa to the Asia Pacific, Senegal to Timor Leste.. I believe the reason people are poor is that they do not have enough money and our challenge is to help instill hope and a genuine sense of self-belief, starting with those of us who somehow work in development. I was the founder and CEO of Diversity@work Australia Inc, a social enterprise developing innovative models, strategies and educational programs to strengthen companies through diversity and inclusion. I hold a Master of Entrepreneurship and Innovation and a Masters of Strategic Foresight from Swinburne University in Melbourne, post-graduate studies in Not for Profit Management at Georgetown University and Negotiation and Conflict Management at Latrobe University Melbourne. I was the Carey Medal winner for 2007 for exceptional and outstanding service to the community. So it goes Published Books: 'Postcards - What am I doing here' (2016) which is a collection of my blogs along with selected photographs, and Stores from the Road - Ten stories for workers in international development (2016)
View all posts by jocknoble →
This entry was posted in Postcards and tagged Working Overseas. Bookmark the permalink.